The African economies and currencies, its regional financial markets and monetary institutions are all
strongly affected by their relationships with the strong currencies like the dollar and the euro. These
effects vary according to whether the economy of a country is linked to the dollar or to the euro : they
are also a function of the nature and importance of the basic products of that country to the world
market. However, the presence of both the dollar and the euro on the continent creates some specific
problems for the African countries. Will the competition between the two currencies make a more
balanced, even polycentric monetary system possible ? Will the African countries experience the
same fate as the emerging economies during the “dollarization” process ? Given the influence of the
dollar on the world market, is the linkage between the euro and the CFA sustainable ? On what
monetary basis – dollar or euro – can the monetary integration project of the CEDEAO be achieved ?
While the answer to these questions will depend on world-level developments and negotiations with
the international financial institutions, it will also depend on the ingenuity of the African peoples.

Another Century of Development

Survey of the Capacity Needs of Africa's Regional Economic Communities 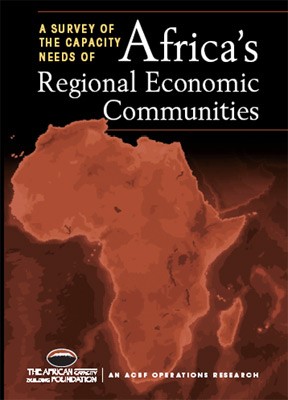