The East African Community (EAC) is a regional organization established by the governments of Kenya, Uganda and Tanzania; Rwanda and Burundi joined in 2007. While existing since 2000, founder members cooperate for almost a century under successive regional integration arrangements.

In accordance with Article 9 of the EAC Treaty the EAC, the institutional framework of the Community consists of the Executive, the Legislative and the judicial arms. The Executive arm is composed of the Summit of the Heads of State (playing the broad Vision setting role), and the Council as the policy making organ, the Secretariat which is the executive organ of the Community and EAC Institutions. The Legislative and Judicial arms are made up of the East African Legislative Assembly and the East African Court of Justice respectively. The functions, mandates, and operational frameworks of these Organs and Institutions are set out in the Treaty, Protocols, and Rules of Procedures.

The Vision of EAC, stated in the Treaty, is to attain a prosperous, competitive, secure and politically united East Africa. The Mission is to widen and deepen economic, political, social and cultural integration in order to improve the quality of life of the people of East Africa through increased competitiveness, value added production, enhanced trade and investment. The Brand of the East African Community is ‘‘One People, One Destiny’’.

The broad objective of EAC as stipulated in Article 5 of the Treaty is to develop policies and programmes aimed at widening and deepening cooperation among the Partner States in political, social and cultural fields; research and technology, defense, security and legal and judicial affairs. Objectives include the establishment of a customs union (2005), common market (July 2010), monetary union and ultimately political federation of East African States.

Article 5 of the Treaty stipulates that the Community shall ensure the:
a) attainment of sustainable growth and development of the Partner States;
b) strengthening and consolidation of cooperation in agreed fields;
c) promotion of sustainable utilization of the natural resource base in the region;
d) strengthening and consolidation of the long standing political, economic, social, cultural and
traditional ties;
e) promotion of people-centred mutual development;
f) promotion of peace, security and stability;
g) enhancement and strengthening of partnerships with the private sector and civil society; and
h) Mainstreaming of gender in all its endeavors among others.

The Fourth Development Strategy contributes to these aspirations given its regional character and priority.

Visions of the EAC Partner states
EAC Partners are diversified in terms of population, economic size, structure, incomesandnominal per capita GDP. Three countries are landlocked and three exploit natural resources. These differences constitute an obstacle that can be overcome only through a balanced distribution of objectives and costs of regional integration.

Although Partner States share in the dream of achieving a middle income status by 2030, national and the Treaty vision and strategies are prepared independently.  The economic, social and political development for the EAC Partner States is supported by their strategic visions as indicated in the Table below. 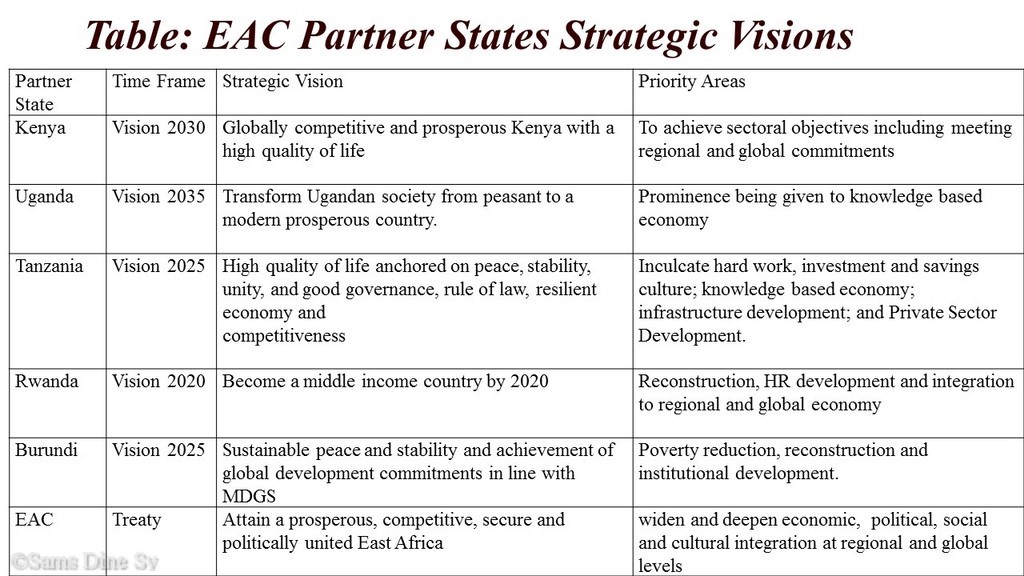 The overall project objective is to assess to what extent all these national visions are compatible with each other and with the Treaty’s vision and to align them.

The specific objective is to build a robust vision of the EAC for 2050. This will be achieved through consultation, dialogue, exchange of experience, knowledge sharing and in-depth studies.

The project helps EAC to ensure that the vision stated is shared by all partners by facilitating consultation, dialogue and in-depth analysis on costs and advantages of the single market, the single currency as the economic basis of the fiscal federalism, and of the East African Union. It contributes to the goal of reducing uncertainties, risks, transactions costs, and delays and increasing volume and value trade. It permits to prevent gridlock, spillback and output failure that are common at the early stages of regional integration because of misunderstandings in the distribution of the EAC economic value added to all stakeholders: citizens, partner states and non-state actors. The project will also contribute to the reduction of disputes and conflicts, that will accelerate the domestication and adoption of Protocols and related instruments signed and deliver outcomes.

The project will be implemented in a series of five phases, each of them focusing on one unifying themes of the vision.

The objective of the first phase is to assess robustness of existing visions at national and community level; the assessment will be undertaken through an impact evaluation of AEC development strategy and vision and empirical survey on several models of vision in Africa’s REC and other federation.

The second phase will focus on the single market completion by crafting the scenario of its completion and implication for the statement of the 2050 vision.

The third phase focus on the scenario of the introduction of single currency and implication for the formulation for the 2050 vision.

The fourth phase focus the fiscal federalism scenarios and it impact on the final stage of EAC Union, which is at the heart of the vision building process.

The fifth phase focus on the implementation of Master Plan at country, thematic and community level.

The different components or phases include:

Sub-component 1:
Assessing past vision of the EAC partners, with regard to existing scenario crafted for the last 50 years at national, regional and continental level.

Sub-component 3:
Preparing the Partners and Non State Actors to adopt a common vision for the next 50 years

Component 2:
Envisioning through the lens of the single market as a unifying theme of the East African Common Market

Sub-component 3:
Formulation of the thematic vision of the single market and its robustness to various shocks.

Sub-component 4:
Formulation of the Master Plan for the completion of the single market during the current decade.

Component 3:
Envisioning through the lens of the single currency as a second unifying theme of the East African Monetary Union

Sub-component 1:
Assessing the past and present of public finance in EAC partners: empirical analysis and current practices

Sub-component 3:
Crafting exploratory scenarios of fiscal union and there counterfactual

Sub-component 4:
Design of the vision of East African Union by 2050.

It is proposed that this assignment be undertaken by a competent consultancy firm (s) working closely with a multi-disciplinary team of experts from the Partner States and the EAC Secretariat. The objective of the consultancy is to assist the East African Community to prepare a comprehensive development vision, within the framework of the EAC Treaty and Visions of the Partner States, which will enhance regional growth and development and move the Community to middle income status.

The Consultant will undertake an in depth assessment of development issues, existing policies and strategies.  This will entail a complete review of the implementation of Community development strategies, Partner States visions and development plans and provide broad-based coverage of the existing situation.  Further, the Consultant will collate views and document strategic options and priorities from the consultation process and develop mechanisms for coordinating the implementation of the EAC Vision 2050.

The specific terms of reference of the consultancy are to:

The Consultant shall conduct wide literature review on the regions’ development and consult relevant institutions, organs and departments of the East African Community including holding stakeholders’ meetings in the Partner States.  In collaboration with the EAC Secretariat, the Consultant will organize and facilitate workshops, meetings and informal discussions in order to come out with top priorities for inclusion in the EAC Vision 2050.

Reports and Timeframes
In carrying out this work, the Consultant shall work closely with the EAC Secretariat, Organs & Institutions, coordinating Ministries in the Partner States, and other stakeholders. The Consultant shall report to the Deputy Secretary General (Planning and Infrastructure) who will be responsible for supervising this work.

The Consultants shall produce several reports as follows:

Financing
To be done