The advent of the single currency in West Africa marks a systemic transformation whose ubiquitous dimension is disconcerting. An innovation that has emerged unscathed from the "crossing of the Valley of Death", it has overcome so many obstacles in its path that its full implementation also raises inevitable controversies well beyond this zone. The Eco and the Economic and Monetary Union programme are thus parasitized by all sorts of preconceived ideas that distract from the essential. Yet an examination of the database on monetary regimes (AREAER 2010-2018) and the lessons learned from the European experience are enough to begin to build consensus. A glance at economic projections to 2050 also sheds light on the major powers' game in the face of this ecosystem, which confronts them with a situation of the "prisoner's dilemma" type.

WHY SO MANY PRECONCEIVED IDEAS ABOUT THE MONETARY REGIME & EMU?

The debate on the monetary regime is essentially reduced to parity. Those in favor of anchoring at a fixed parity of the Euro/Cfa type or flexible to be defined, are opposed to those in favor of a less restrictive or even free parity targeting, as in Nigeria a monetary aggregate or, as in Ghana inflation. The former are accused of a form of subservience in exchange for macroeconomic stability. According to IMF statistics*, only 12% of countries choose a "fixed peg" while the majority (34%) actually opt for "free floating". As for the so-called "flexible" intermediate anchor, it appears rather like a Spanish hostel for tax havens. The African Countries of the CFA Franc Zone are moved from one year to the next between these different classes: "fixed" in 2006 in the same way as the Euro Zone or these islands and countries of the ECCU Zone; "flexible" in 2018 when the other two switch to "free floating" for the first and "fixed" for the second. Or when, in the name of stability, the CFA Zone flirt with tax havens.

The advocates of a less restrictive or even free parity are accused of mimicry in their quest for dynamic efficiency because this choice is considered to be the prerogative of the grat or middle powers. In 2006, 22 African countries had made this choice. By 2018, there will be only 9, with very different profiles: Somalia and Ghana or Madagascar and South Africa. While it is difficult to assess the potential impact of this regime on microeconomic efficiency, it is also necessary to ask why during this period all African oil countries have abandoned the floating of their currencies.

Fixed or floating, the impact of the choice of a monetary regime on social cohesion, substantial capabilities, regional equity and transgenerational equality still awaits the light of positive political economy. Since the flowering of work on the conversion/transformation of the former Soviet Union, there has been almost complete silence.

EMU as a process of regional integration is another source of confusion. This approach is held up as a model by advocates of a gradualist and repulsive approach for the proponents of a United Africa "here and now". The former are reproached for not learning the lessons from the failures of the European Union, which still remains at the stage of a Federation of Nation-States despite 70 years of construction. To the latter, for confusing dreams with the reality of a captive space, a grey zone confined to the upstream part of the value chains, at the mercy of hunters, sorcerer's apprentices or dealers. Yet here too, the history of European construction and criticism of the policy process theory offer an insight that sends these two irreconcilable camps back to back. What is it all about? Initially, it was the "Report on the Economic and Monetary Union of the European Community" (1989) which, at the request of the member countries, defined the process and the stages towards EMU. Faced with the slowness to approve it and the hesitations of the latter, the Commission devised a ploy which consisted in brandishing the rag of political union without specifying whether it was a precondition or a preliminary obligation. It resorted to the Erga Omnes principle, the Safeguard Clause and the obligation to remove legal obstacles to the Ecu to force countries to adopt the programme at their own pace, including denouncing all bilateral monetary agreements with non-European countries.
That was all it took to trigger an outcry and push the leaders meeting at the Genoa Summit in 1991 to tear each other apart over Political Union, while accepting without discussion the devolution of powers over Monetary Union so as not to publicly display their division. Although the ploy worked well, as it was crowned by the Maastricht Treaty, it must be acknowledged that since that Summit, Political Union has become a non-subject, even a taboo, despite the risks of disintegration.

Beyond the historical and economic dimension, it should be recalled that EMU is merely an illustration of the theoretical framework in vogue at the time, better known as the " Stages Heuristic ", interpreted as a policy shortcut. This framework, along with other currents and theories, is part of what is known as policy analysis, a science that has developed at a dizzying pace in the United States in the second half of the 20th century, within an administration seeking the capacity to formulate and implement good policies, in contrast to the European Westphalian philosophical tradition of power, which derives its legitimacy from the exercise of public power through the distribution of authority and the control of public service. Late adopted in Europe, this trend nevertheless continues to flourish there to the point of structuring almost all the initiatives and programmes in which its institutions are involved, including those in charge of specifying global requirements. This trend has been called into question since the 1980s and abandoned by the discipline's main masters of thought without proposing other theories that escape the positivist drift, regardless of the supporters of normative approaches. Hence the need to invest in this discipline in order to have an intellectual framework capable of meeting the conceptual challenges of regional integration and globalization. This concerns not only African institutions but also all international entities.  Unfortunately, not everyone is moving in that direction, especially by qualifying one of them as "brain-dead", which is tantamount to signing the same act for all those that have still remained at the stages heuristic :  EU, OECD, G7 and African Union, among others. In this respect, NATO's decision to initiate a global foresight reflection exercise is to be welcomed. The lessons learned from previous exploratory exercises carried out here and there should also be drawn, in particular when to build “global scales”. This is the case for "World in 2020 and Megatrends STI/ OECD", "Global Trends/NIC", "World in 2025/EU", not forgetting "Agenda 2063/AU" among others. 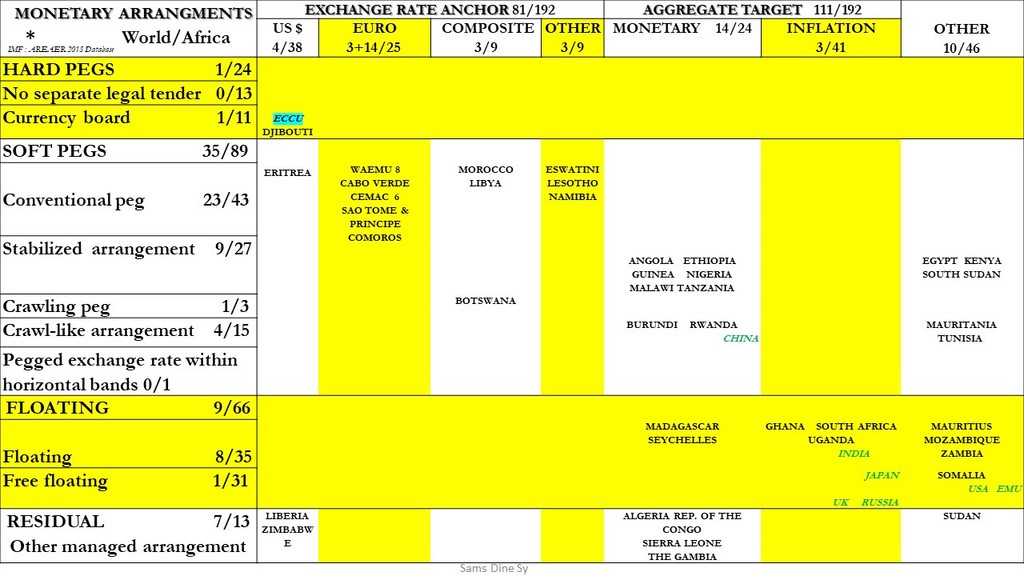 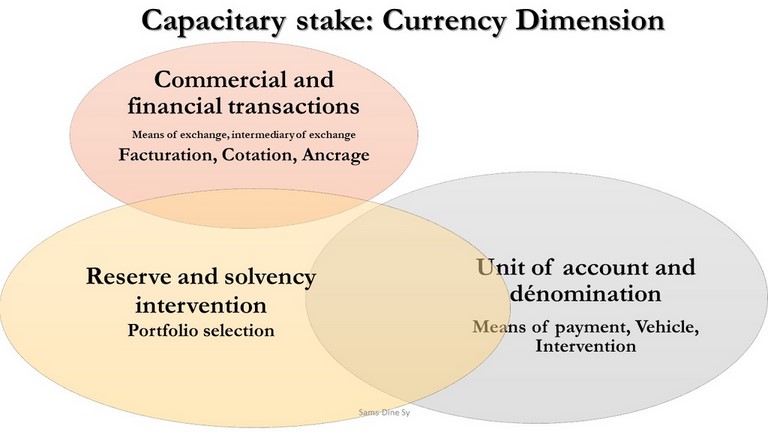 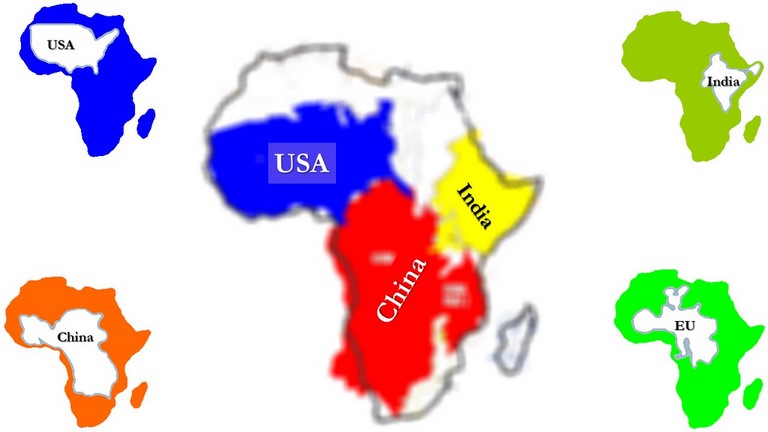 By focusing on the monetary regime and EMU, we almost forget the main points of the economic projections for 2050, the conclusions of which are irrevocable, at least for the five main countries that share nearly 80% of world GDP: China, USA, Eurozone, Japan, India and the United Kingdom**.

Let us take the case of Europe, in particular the Euro Zone, whose currency serves as an exclusive anchor for nearly half of the African countries against only 4 for the Dollar. With 20% of world GDP, it ranks third behind the USA and China and ahead of Japan and India. By 2050 - unless there is a major bifurcation of which this region is accustomed - the Euro Zone's share of world GDP will fall to 10% if it can no longer be maintained in Africa. Faced with this situation of the "prisoner's dilemma" type, the Darwinist, anti-immigrationist, great substitutes, lifestyle protectionist rhetoric appears for what it is, a counterfire. In the same way as the "hold me back or…". To get out of this dilemma, each member country invites itself into the African agenda by opting for a "free rider" type strategy. When, in order to take its place, one country embarks - with a sword in its hand - on the restitution of works of art, gold bars and cash deposits, another aligns "compact promises". Neither of them, however, takes the trouble to learn the lessons of past failures, such as the "deal" concluded with an Asian country on the back of Africa in roughly the following terms: "you reduce your exports and investments to Europe in exchange for a place in the African market".

The same type of dilemma affects the Asian space, particularly China. With this country, the African continent has gone in less than a decade from being a drain on surpluses, scraps and counterfeits to being a pole in the growth triangle. At the same level as the Eurasian space for transport infrastructures (Belt & Road Initiative) and the trans-Pacific space for digital infostructures (5G...). Also, the more Europe and the USA shake the rag of the trade war, the closer China but also India get to Africa to maintain their position in the top 5 of the world GDP while strengthening the position of the continent as a Global Market.

Let's come to America, especially the USA, which is facing a progressive loss of its global aura that is turning into a nightmare with the prospect of a steady decline in its share of world GDP, from 30% in 2010 to 20% in 2050. If this projection becomes effective, the share of world trade denominated in dollars will be reduced accordingly. Then its currency and treasury bills will no longer allow it to make others bear the cost of the explosive debt that it is the only one to allow itself. To continue to count during this first half of the century, this country will in turn have to explore other options: redefine its role vis-à-vis the Rest of the World (ROW); mobilize Afro-descendants to "replace" Europe and Asia in Africa; launch its global platforms to attack the continent... The common point between these options is that they target the circum-Saharan space and its soft underbelly as an entry point. There will be no shortage of specialists in polemology to theorize the redeployment of NATO by recycling the Siberian postulate in these terms: "who holds the Sahel holds Africa. Who holds Africa holds the key to global change. Who holds this key holds the key to tomorrow's world! ». 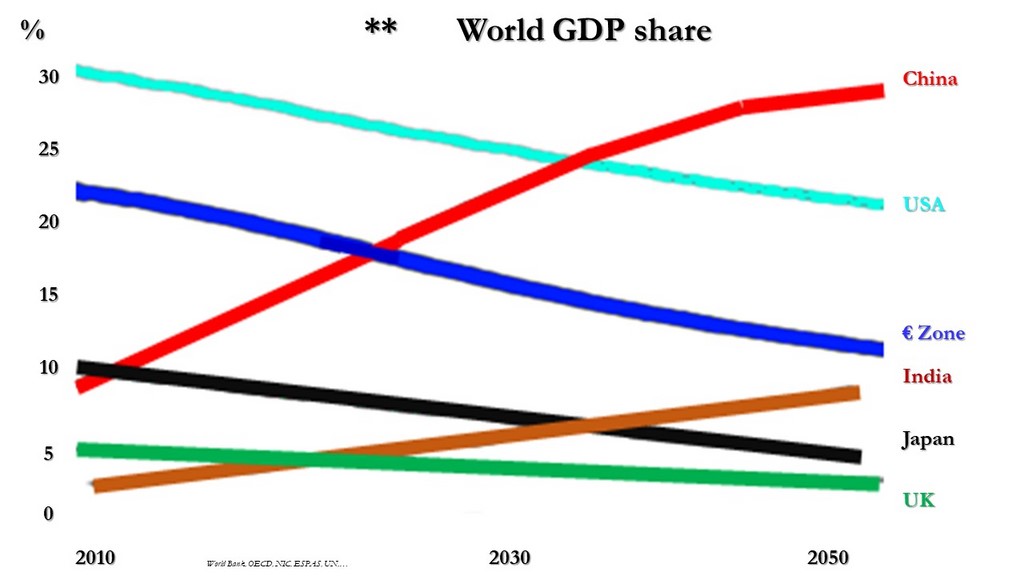 WHAT AGENDA FOR THE AFRICAN UNION?

The African Union must be fully aware of the implications of the process under way in its western part, which also concerns the northern and central border areas. This is the place to recall that these 3 zones were not up to the task when the rest of the continent succeeded in setting up the Tripartite Zone in anticipation of the FTAA.

It is therefore the responsibility of the AU to stop conceiving itself as a projection zone and to position itself as the Global Platform that articulates the three spaces in which it is inserted: Afro-European, Afro-Asian and Afro-American. It is at this level that the Eco must be inscribed in the dynamics of the construction of a Global Currency. Instead of spreading themselves too thin on the parity of the Eco, the West African authorities should put this point at the center of the agenda of the next meeting. It is also up to this Community to position itself as an essential partner of all the digital giants operating from the three transcontinental spaces. This point should provoke an unprecedented reflection within a "Platform Summit" because it is from there that the 2.0 cycle of the Post-Westphalian African Federal Eco-System is go viral. 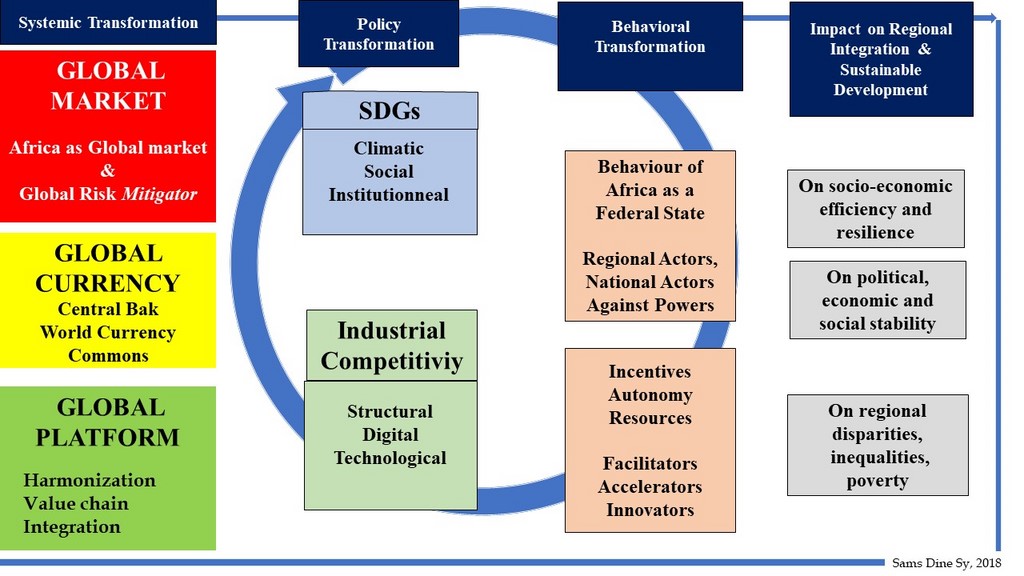 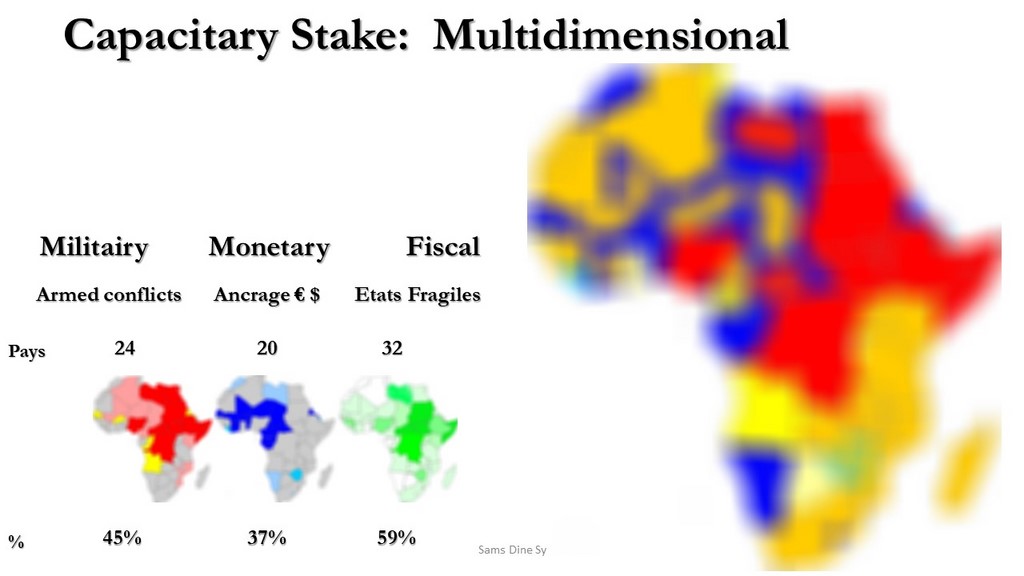 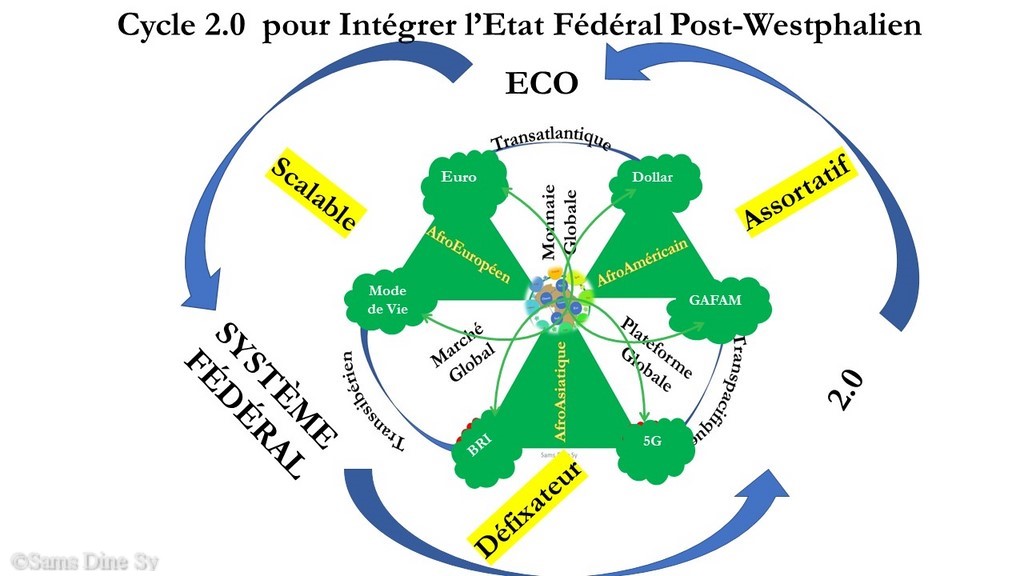 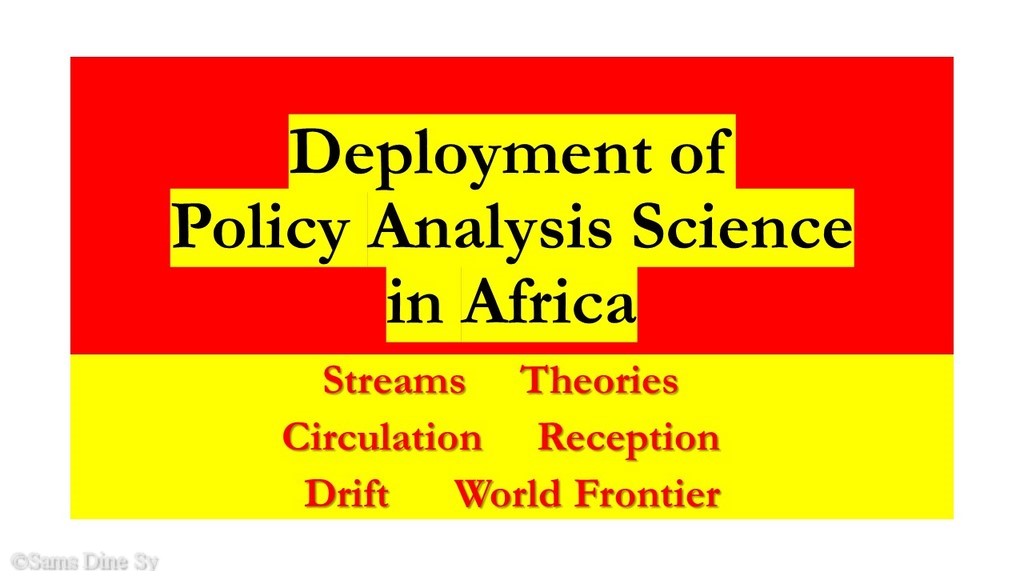