(To whom it may concern)

The Westphalian state is the subject of all grievances, both from the depositary and exporting countries of this tradition and from the countries that adopted it late. The quality of policies and the powerlessness of public authorities are criticized everywhere. Hence this naming and shaming launched by R. Hausmann  "Don't blame economics, blame public policy! "(Project Syndicate) and taken up by a number of media and platforms, from the flagship of the academic world (Harvard) and excellence in policy analysis (HKS). This is due to a lack of rigour compared to medicine or engineering, the disciplines through which biology and physics are operationalized.  His frustration is all the greater because he probably remembers Charles R. Plott's premonitory and optimistic view of the future of policy analysis through tesbedding and policy testing (Economics in 2090: the view of an experimentalist; Economic Journal; 1990). To remedy this, it proposes an immersion of public policy stakeholders in the "hospital" with, on the one hand, "patients" who come to present their problems as governments, public officials, users and, on the other hand, "doctors, assistants and nurses" who help to solve them in their capacity as professors, researchers, experts, providers, doctoral candidates and students. This proposal - which originated in forensic medicine - is not new and is attracting interest from other disciplines and fields, at the same time as the practice of randomized clinical trials is becoming more widespread.

The forensic model is interesting for two reasons. When it is deployed in new fields, including the digital age such as the Internet of Things, it makes it possible to guarantee the quality of service, correct failures and prevent the risk of attacks, corruption or invasion of privacy. The reference framework transformed into an ISO standard covers the same steps as the one recommended by the Growth Lab. Regardless of the discussion on the globality of this standard, the question arises differently for policy analysis where the forensic program is one of several streams (David Paris and James Reynolds (1983) Paris, D.C. The Logic of Policy Inquiry. New York: Longman). It aimed to preserve pluralism and - through surveys and tests - to arbitrate between interest groups with an ideological agenda. Why then bring this paradigm and all the alternatives tested to the forefront with disappointing results, without taking a step back?

Policy analysis is marked by two major trends: an ability to mobilize almost all the other disciplines that are operationalized in it and an ability to deploy around the world in such a short period of time. Taking these trends into account reveals the double interplay of influence between knowledge and power. In other words, how currents and theories have been used to capture the state by interest groups and how the role of the USA as a first mover has reduced the rest of the world to that of a follower.  By structuring the global agenda, the federal state has imposed itself as an attractive but non-replicable model, while neo-liberal ideology and its emblematic figure - the political entrepreneur - are spreading everywhere. As curious as it may seem, this discipline resembles a UFO, if not prose, because if policy analysis is present in daily life, it is still largely confidential. It still escapes the media radar when everyone is involved without knowing it.

A discipline of applied research focused on the production of public policy, it has been informed by the work of great thinkers and has been built as the Westphalian European state has spread throughout the world since the great wave of decolonization. But it has only seen this rapid deployment since the 1970s in the United States, where it has been institutionalized within an administration in search of the capacity to formulate and implement good policies. It was also necessary to distinguish oneself from this philosophical tradition of power imported from across the Atlantic, which derives its legitimacy from the exercise of public power through the distribution of authority and control over the public service.

The hard core is the positivist paradigm. Initially dominant through its different forms, it reflects a technocratic vision of the world and a planning approach based on empirical surveys and above all a vision that neglects "politics" in the Lasswellian sense of the term and the place of arguments. Political expertise draws on the social sciences to "speaking truth to power", "frank and free" in the Westminster tradition, which has been an extravagant vitality in recent times. Claiming to be an experimental science, the hard core is based on positivist epistemology and a neutral scientific method. The normative approach - the protective crown - facilitates the transition between the positive and the volitive approach and in both directions.

As for the volitive analysis of politics, it is based on constructivism, is part of the long term to better integrate public decisions into it and declines the path from upstream to downstream based on transformative political will. It unfolds on the limits of positivist and normative approaches that tend to summarize public action as a confrontation between interest groups. Like the last one, it is based on prescriptive methods while linking them to a prospective approach that can be described as preventive and normative or exploratory and global depending on whether it is based more on quantitative or qualitative data. Volitive dynamics is the global frontier of political analysis where different producers of meaning coexist to prepare for the advent of the post-Westphalian federal state. Its integration into the research and training program is still timid. Considered by post-positivists as the first phase of the political process (B. Hogwood and L. Gunn, Policy Analysis for the Real World, Oxford University Press, Oxford, 1984), this approach goes far beyond the framework of the discipline and tends to become autonomous, even if it is included in more general frameworks such as the theory of social change or that of systems transformation.

Policy analysis would not have had a major breakthrough in the United States without the intervention - in the name of pluralism - of interest groups and coalitions engaged in state capacity development strategies to formulate and implement good policies, even if it meant opening the way to other capture strategies of the regulatory state. These groups challenge the monopoly of public power in the provision of public infrastructure and services and exploit the weaknesses of analysts and experts to share, or even impose, a private agenda. Also, what has emerged over time as a positivist drift, has given rise to a multitude of currents and theories which, without undermining the hard core, have tried to "making sense together". In the meantime, the number of nation-states has quadrupled, all more committed to the principle of sovereignty than the other, a belief that has become so sacred that any abandonment of a crumb is tantamount to treason - as Ervin Lazlo wrote in “The Age of Bifurcation: Understanding the Changing World”

Contrary to popular belief about the fundamentals of the American hyperpower, it is its role as a precursor in the deployment of policy analysis that allows it to shape the very notion of the state and impose the norms that make it the gendarme, hegemon and regulator. More worryingly, no structuring thought school is yet able to emerge from the rest of the world, which makes the "Federalist" a model that reduces other attempts at imitation to the status of a repeller, whatever its declination: late federations, the United Nations, State-Nations Union Projects... The chaotic circulation and the laborious reception of the various currents are always reflected in the training and research program mired in positivist drift, even if tinged with normative, but without ever succeeding in integrating at the desired height the volitive dynamics that are nevertheless recognized as essential, if only to face the invariants of population ageing, extreme events, secular stagnation and their translation by the explosion of inequalities.

The Federal State has succeeded in structuring the international agenda through the emergence of each current or theory. More than the currency, the army, or even free market, this discipline constitutes the disruptive innovation par excellence and its distinctive capacity. Hence the question of the responsibility for its conversion into an annuity. The positivist drift preserves the status quo on which neoliberal ideology thrives, with the figure of the Policy Entrepreneur at the center. This figure has established itself in viral mode through a multitude of forms, the purest of which is embodied in the Strong Man or Providential or the Iron Lady better known as R. Reagan and M. Thatcher with their emblematic slogan "There Is No Alternative". The most caricatural allow all excesses from the call to war with weapons or ideas to the exclusion of everything else.

The figure of the Policy Entrepreneur destroys what was the essence of the Westphalian State and public policy is an administrative burden.  Theorists and practitioners fear in some respects that they may be locked in a "prison" by their paradigm, as Tim Smeeding so aptly summarized in his Book Review  (Administrative Burden: Policymaking by Other Means, Pamela Herd, Donald P. Moynihan, New York, NY: Russell Sage, 2018). We can also refer to the metaphor of the "Banquet Hall", with on one side the chefs and on the other the guests, all "staeving the beast" that is the state.

If ever the forensic model should be brought up to date, it should be to randomize - from one era and region to another - the circulation and reception of currents and theories as well as the forms taken by policy entrepreneur figure, both in US and in the Rest of World as well as within international institutions and large-scale initiatives (UN, IPCC, OECD, NATO, G7, EU, AU, BRICS, OBBOR...). The global effort to publish all documents, reports in addition to papers and books on the subject in open access should facilitate such Cluster-randomized trials

If there is a demand for new paradigms, it comes first of all from the nation-state as inherited from the Westphalian tradition whose obsolescence is programmed. It also comes from the country that is a first mover to policy analysis and from which no innovative paradigm has emerged.  It still comes from the Rest of the World (ROW) where it has been deployed for half a century without any structuring school of thought emerging. It comes mainly from the drifting positivist hard core but which still structures the global agenda of main stream training and research. Finally, it comes from other disciplines that have as much as the economics, have invested in policy analysis without succeeding in renewing it. The science of policy analysis nevertheless deserves better than bashing because it is definitively part of a global dynamic that integrates multi-spatial and multi-temporal in public decisions. The Rest of the World is in a position to serve as a laboratory from which this dynamic should be deployed to put the post-Westphalian Federal State on the worldwide agenda.

Of course, it should not be considered as the ultimate weapon or mass consumer product par excellence.  As in the last half-century, the mainstream training and research program must make a qualitative leap beyond the positive and normative policy analysis. It is this leap that equips national and international actors with a robust vision and provides them with credible options by mobilizing all disciplines. The articulation - within a three-clusters logic diagram of policy analysis with global foresight and capacity transformation - is a step in this direction. This is the expectation of this program, far from any form of bashing.

To learn more about... 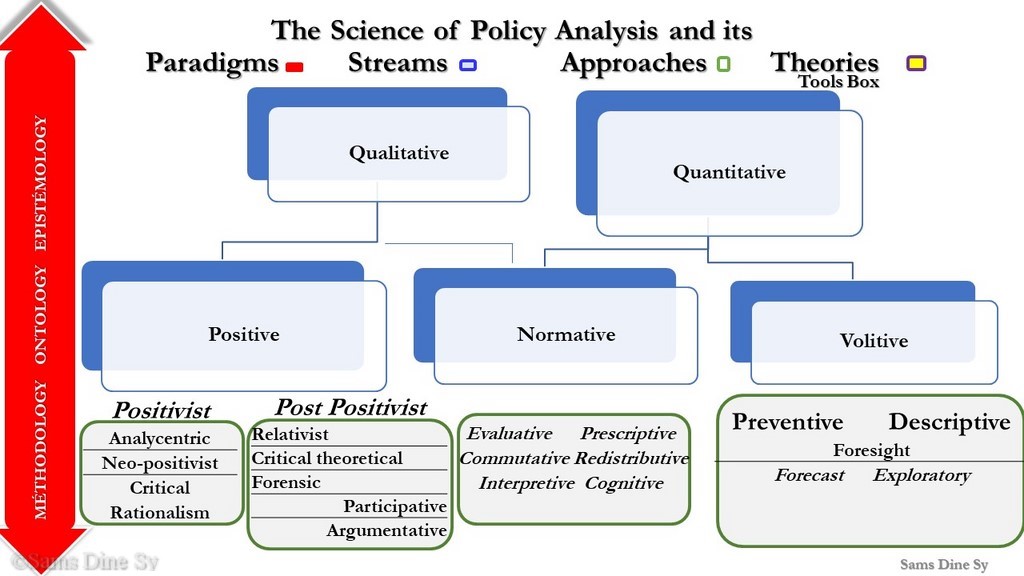 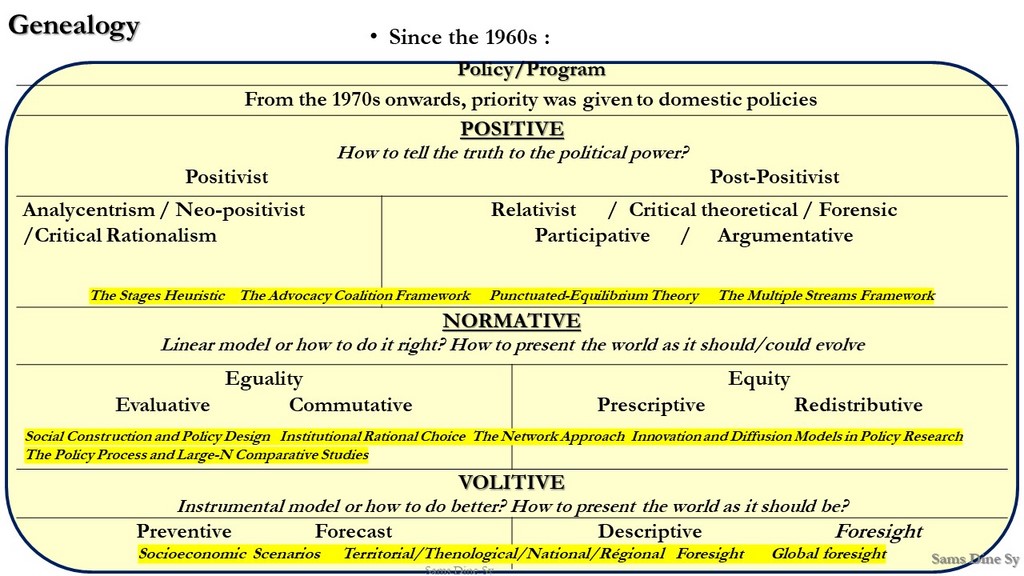 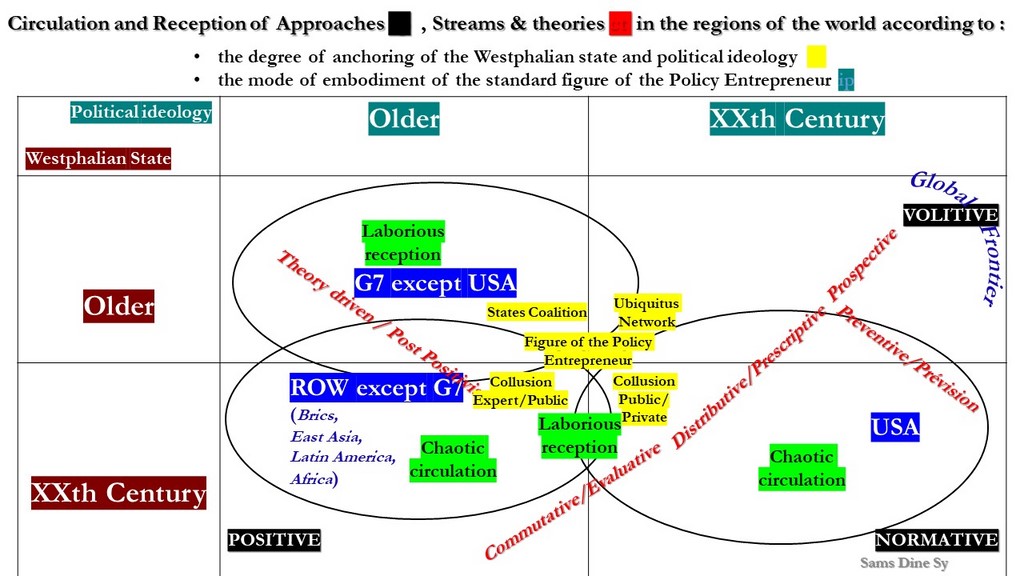 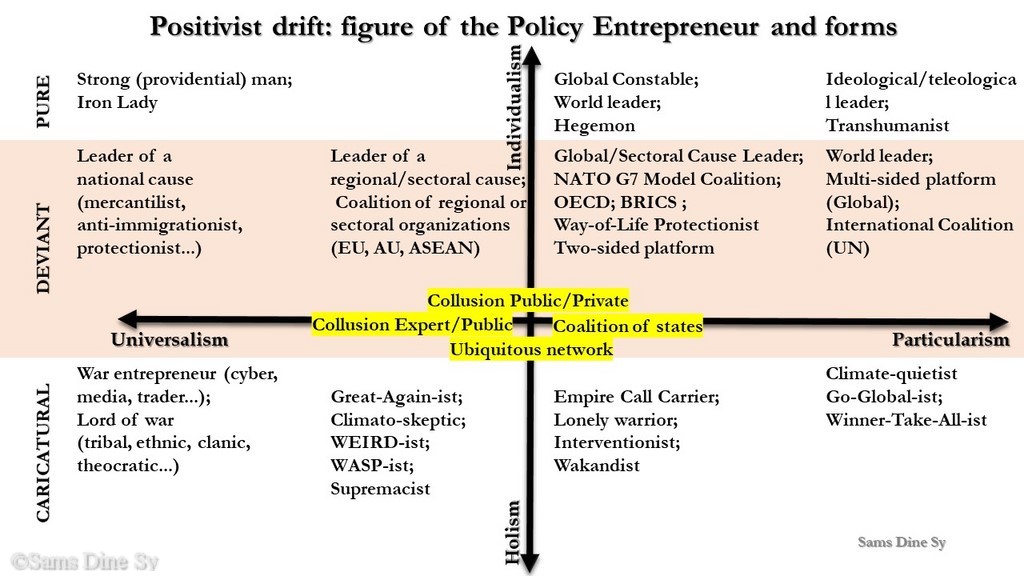