Does this virus lead us into one of the most disruptive cycles in the history of mankind, such as this winter journey - anything but splendid and troubled - that only stops at the end of solitude?

The prevailing romanticism suggests so much to the point of undermining any attempt at anticipation. "They all predict like sick people and the whole world an infirmary". This allusion to the Goethean metaphor calls for caution before administering high doses of medicine. It is that this virus does not only affect the individual and the community. It attacks the company and the state, endangers the organization and the platform. If the first two targets only raise logistical problems, the same cannot be said for the other two - patients who are left to fend for themselves in the absence of a "medicine of the world".

Analytical frameworks derived from pforesight, forensic and cyndinic research, mobilized with varying degrees of success, can undoubtedly help in this management. With discernment so as not to fall into the immoderate use of the qualifiers chaos, catastrophe, tsunami, disaster, systemic risk, global crisis, great lockdown, total social fact, scourge, shock?

When forensics turns the hospital world into a banquet hall...

This profusion liberates magical thinking to transform each individual or legal entity into a patient and the whole world into a hospital. Yet, in reference to forensic analysis, long before Covid 19 spread, the alarm had been sounded to blame public policies, that is, experts in policy analysis.

It was even recommended that they should take their cue from doctors and treat them as patients by equipping them with toolkits to deal with their needs. This call - made at virtually the same time as the virus was surreptitiously beginning to infect - has gone unheeded.

While the virus is still in its infancy, the number of failed states, bankrupt companies, and delegitimized regional and international organizations and platforms is exploding. So what is the point of treating them as doctors when the most lucid among them did not hesitate to acknowledge that their community had locked itself up in a prison, mired in the positivist drift and padlocked by the normative protective belt?

In a world transformed into a hospital, it is better to be admitted to it if you have a central bank capable of dropping trillions of dollars from helicopters and a stock exchange capable of guiding speculators. In fact, this barrier to entry only serves to select those who, once in the hospital-world, behave as if they were in a banquet hall and help themselves to starve the beast, even if it means cancelling a few debts out of compassion. They will have plenty of time to play on the global financial cycle to impose debt limits on others by moving the VIX in the desired direction at the risk of accentuating conflicts of interest between central bankers and rating agencies.

We would have liked African economic research - instead of focusing on debt cancellation - to take up these issues to expose the monetary regulator's capture practices and develop alternative sustainable rating grids. Let us recall in passing that this subject was exhausted in the 1960s when, in order to circumvent the censorship of the major powers forbidding him from making any reference to underdevelopment for the benefit of the Rostow's Stages of Growth, Samir Amin had resorted to the development of underdevelopment theory illustrated by the vicious circle of primitive accumulation

The climax is reached when the illusion of knowing where the danger comes from reactivates, in the name of cyndinics, the regime of anguish and the "war on what". Surely the butterfly effect triggered by contact between non-Caucasian skin and an unlikely scale? To be derided if this image did not flourish in the mainstream media and in the analyses of the network of think tanks considered among the most influential in the world and to which research circles, futurists groups and all sorts of intelligence institutions are associated, of which CAPS is only an extension.

This says a lot about the deadlock in which this platform finds itself, condemned to remain two-sided under the effect of the clash of visions of "Deutsche Mark Uber Alles" versus "Europe Franc Zone en Plus Grand". The reaction of the German Constitutional Court is a brutal reminder that the Euro is only the translation into globish of the Mark.  Therefore, we should not underestimate this past which is not being forgotten because of a succession of murderous wars for more than a century and heavy compensation payments partially reimbursed with the resources of the colonies.

Is there a link between the abandonment of war penalties and the emergence of new forms of colonization to the sound of independence cha-cha? It is up to each one to make a judgment on the way in which Ramses 2001 recycles the terminology of A. Martineau to criminalize the "failed states" in these barely allusive terms and to suggest the possibility of recolonization with a view to creating: "permanent political establishments autonomous from local powers, and therefore dependent on centres of power outside the territories concerned"?

Yet the evolution towards a multi-faceted platform of what popular imagery reduces to the françafrica is quite possible with innumerable network externalities.  For example, turning Brexit into an opportunity for the Kingdom gone United return returned in four parts, triggering the dynamics of a Europe of 50. The successes of the German federal model against Covid 19 should push in this direction.  It would then be time to move from the slogan of the Lone Warrior to the embodiment of the Euro-Mode Life vision, which is robust yet poorly explained.

Africa has every interest in exerting its influence in this direction for at least two reasons:
What kind of breakthrough is this virus called?

Let us now examine the possible role of foresight in understanding the ruptures caused by this virus. All efforts to project its spread and to quantify its socio-economic effects are to be welcomed, even if the horizon remains quite limited and for good reason. From the point of view of anticipation, these exercises are more a matter of modelling on the basis of normative scenarios whose robustness is being tested on a daily basis.

It is better to turn to earlier global foresight exercises with a horizon beyond 2020. Because of their complexity, these exercises are rare; at most a dozen or so, closing one's eyes to those that have not been completed (World in 2025), or which are cautiously limited to a form of trendometric around a trend scenario and variants (all others).

Review of Global Foresight Exercises
SCALE FAILURE
Sams Dine Sy, 2017
The main shortcoming is the lack of a grid to test their robustness. Indeed, any scenario must pass through the test of unpredictable but high-impact events generally identified as wild cards. The development of this grid is inseparable from the multi-spatial and multi-temporal sequencing of global requirements and the construction of scales of uncertainties and responses.

This large-scale architecture does not come out of nowhere. The science of dangers and chaos theory constitute useful complementary sources for going beyond this first simple grid, developed in 2010 in the framework of the Waemu 2030 exercise in response to a "requisition" from the Commission to repress the friendly takeover bid launched by a foresight lobby that had nothing better to offer. This updated and illustrated global methodology is available for free access.

It is tested using a matrix of factors with enough inboxes to classify the wild cards according to whether it is radical or relative, destructive or creative. To be complete, this passage must be done at each level, both for the scale of requirements and the scale of answers.

Megatrend tests are the business of demographic and environmental specialists and cliometers who examine the impact of the disruption on each major trend but also on its invariant, such as population ageing, extreme events and secular stagnation. These specialists need a great deal of hindsight to conduct robustness tests.

The other steps to be tested are of four types:
In the case in point, the concrete question is how the pandemic affects:
This at least limits the failure of predictions that have been proliferating in recent times. The debate on globalization is an illustration of these errors. The proponents of deglobalization who have the wind in their sails reduce it to a single form to the point of betraying their prejudices. In fact, they are in favour of it on condition that all the benefits are wrapped up in their flag. This is its exclusive form illustrated in the past by the European and now the American. Yet never before have the various forms of globalisation appeared with such clarity as with the spread of this virus.

But at this stage, according to the wild card matrix, it should only be a relative break: creative in the sense that inclusive globalization is manifested by more solidarity and the extensive form is - against all expectations - reflected in more fragmentation of tasks within global value chains. It is destructive insofar as the exclusive form materialises in the stigmatisation of Africa, of the black skin that is said to be the vector of transmission of the virus, while the intensive form emerges with the excessive financiarisation and dematerialisation that has reached central banks, opening up the prospect of the disappearance of paper money in favour of data as a unit of account, store of value and payment instrument.

We are therefore for globalisation in the presence of four scenarios, without being able at this stage to say which one is the most robust. The vision and the resulting options do not legitimize any of the political agendas that have been developed so far.

Uniformising globalisation, painting it with a prefix or arranging it in acts does not improve understanding of the uncertainties and does not provide global scenarios.
Sams Dine Sy, Mai 2020 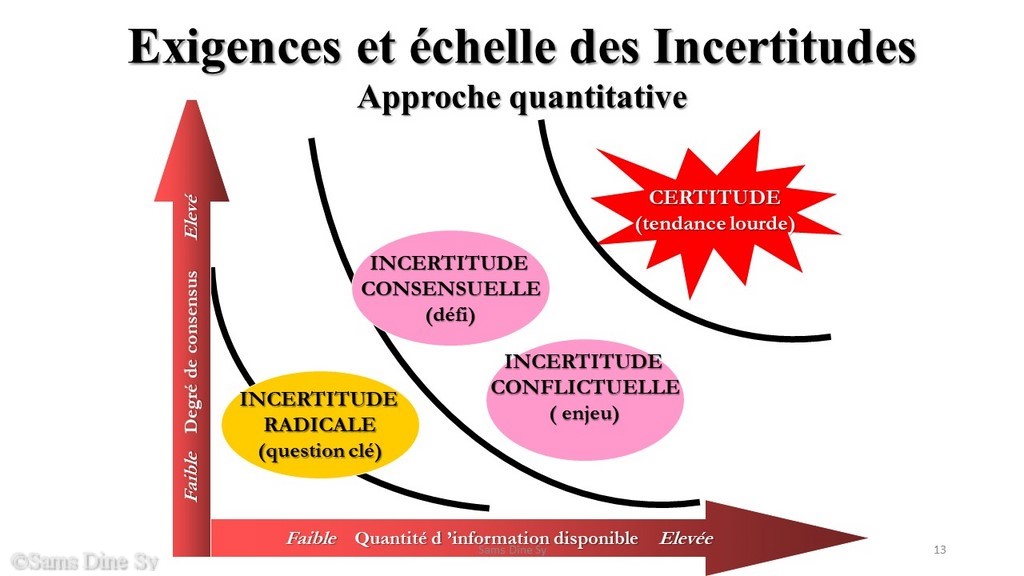 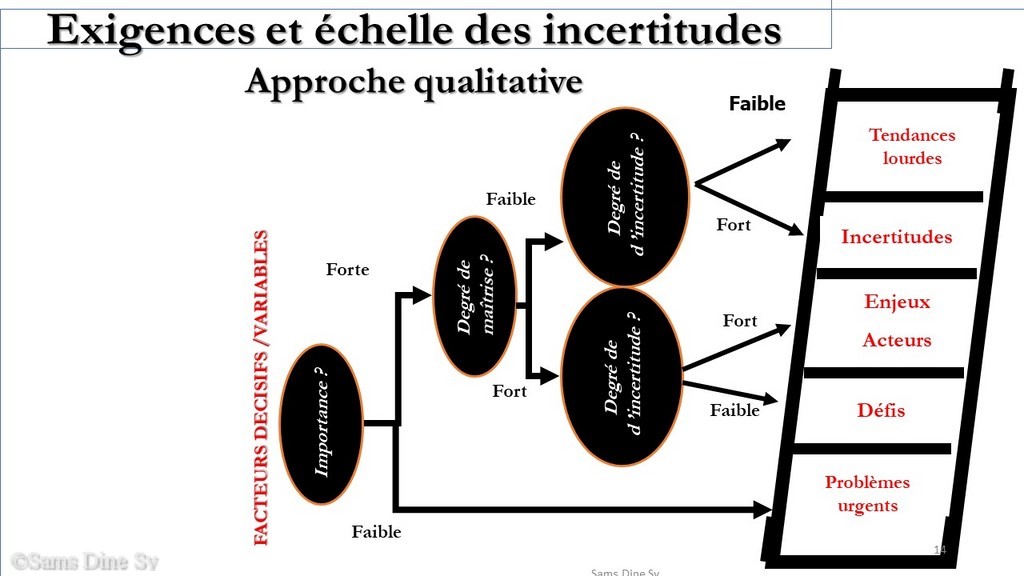 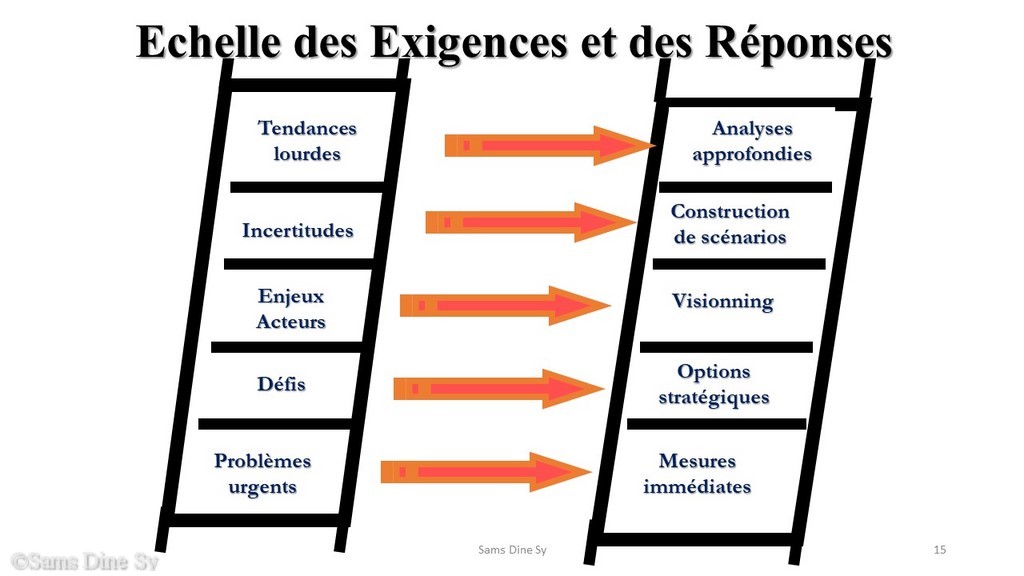 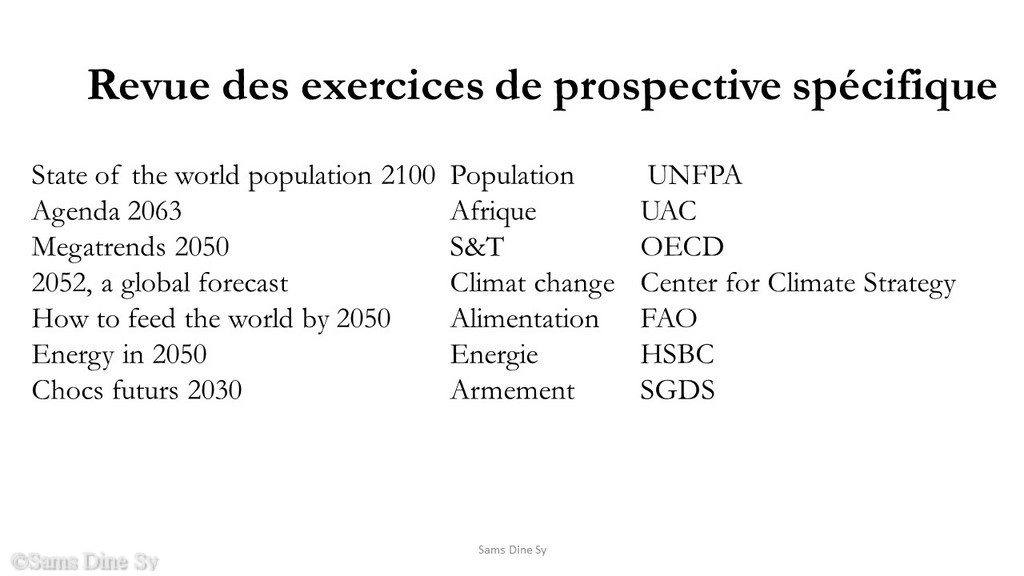 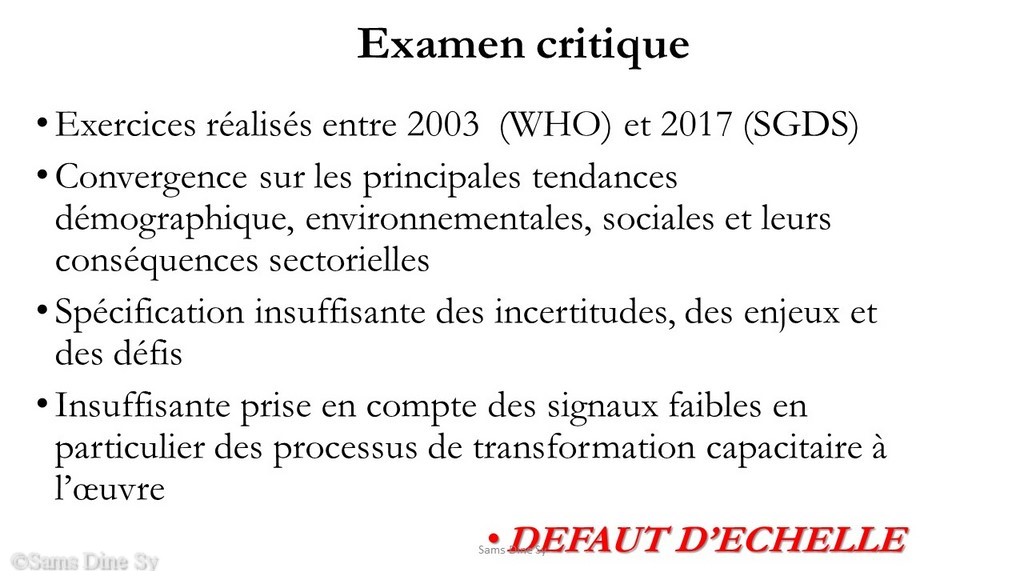